All Blog Posts
By Liz Torczyner,

People tell me I look like a guy who knows his wild mushrooms, which I take as the highest of compliments. But this kindness is almost always painfully followed by a stumbling confession of how little I actually know about these mysterious mycelium. Honestly, a simple shoulder shrug would be a better response, going along with their positive vision of me — maybe it’s better they don’t know the truth.

But I just watched Fantastic Fungi on Netflix and it delivered the kick in the pants I’ve been needing. It’s not that I know much more about our local mushrooms after watching the movie (that’d be too easy), but the flick offers a mind-opening experience into this truly fantastic corner of the natural world. Learning from Paul Staments, the film’s main subject, was the inspiration I needed to commit to my self-education on the subject.

Unfortunately, I was not gifted with a memory for names. I’m lucky if I get my kids’ names right, let alone something with multiple syllables. And as for scientific names? Forgettaboutit. So, I’ve decided to keep things simple and start with a few (see below) of the most common wild mushrooms of the Bay Area. If I can remember these, maybe there’s hope for me yet.

Winter is the season to see wild mushrooms in Northern California — the pinnacle of their fascinating lifecycles. Join me: 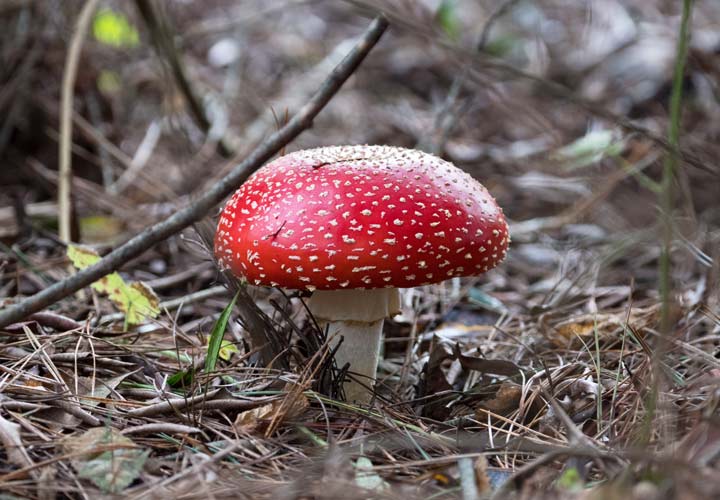 Popularized as the mushroom in Super Mario, the Smurfs and, most recently, as the mushroom emoji, the fly agaric needs little introduction. Interestingly, the common name comes from its ability to attract, intoxicate and paralyze flies if chopped and placed in a bowl of milk. Look for them in the leaf litter of our local pines (as pictured above). 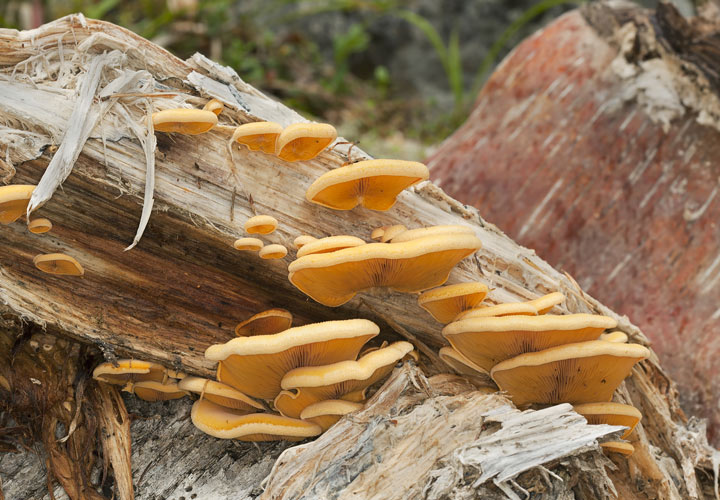 A convincing look-alike to the edible and much loved oyster mushroom, this non-toxic species is distinctly lacking in culinary appeal and is known for its strong odor — an unappetizing, sulphureous stench of rotten cabbage. Regardless, its elegance is worth a moment of appreciation. Look for them in clusters on decaying wood.

Many of our local mushrooms are poisonous and potentially fatal if ingested. In addition, foraging in local open space preserves and parks is prohibited. Please respect all rules and regulations. 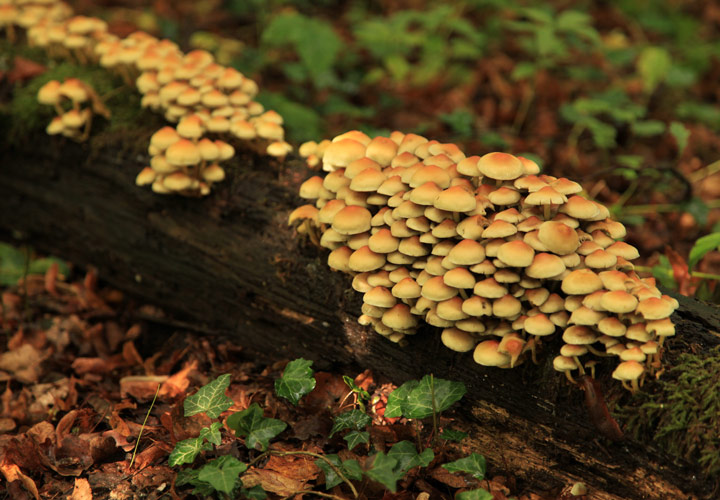 This wood-rotting fungus is not a fussy feeder, equally relishing hardwoods (oaks, maples, alders) as well as softwoods (pines, firs, cedars). They are saprobic, meaning they play a critical role in breaking down key nutrients on the forest floor. Look for them in clusters within rotting tree trunks and on dead roots. 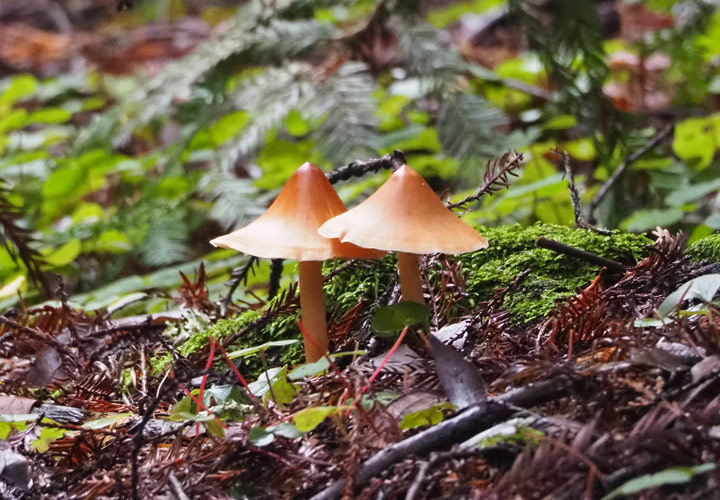 True to its name, the redwood rooter is the only known species of medium to large fungi found at the feet of giant coastal redwoods. You’ll find their tall stems stretching high above the forest’s thick layer of redwood duff (needles and twigs). Look for them… well, maybe that’s obvious. 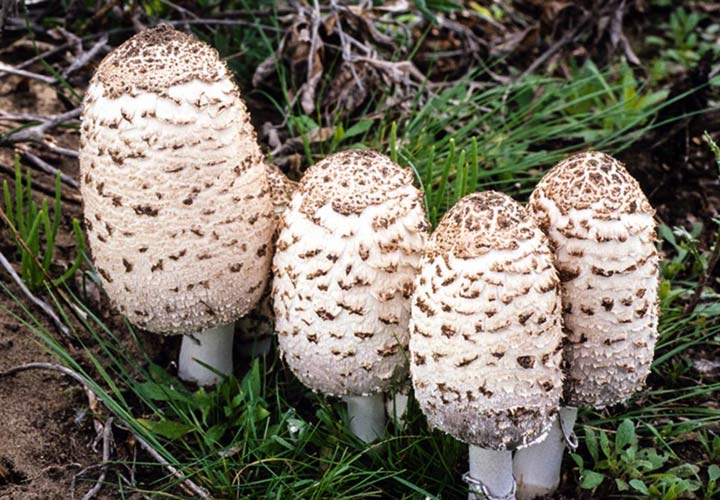 This is an easy one to find and identify, often seen growing on lawns or along the side of the road. They are somewhat unique in that you can find them almost any month of the year when enough moisture is available, but they are most abundant at the start of winter rains. Look for them in lawns, playgrounds and along the side of the trail. 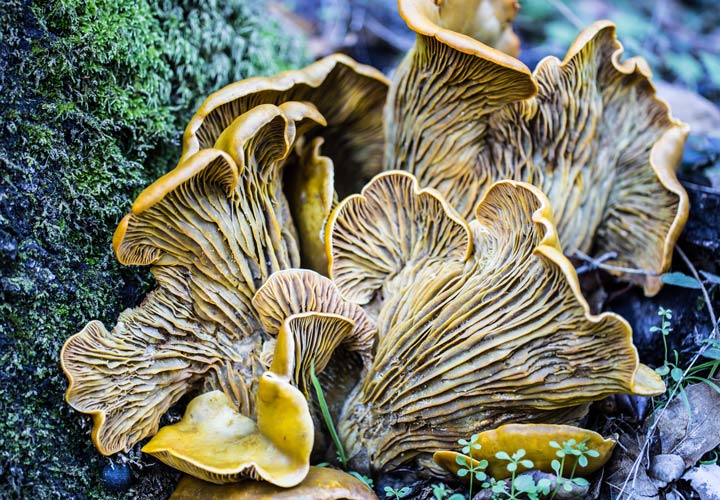 It’s not just this mushroom’s orange color that makes it resemble a Halloween jack-o-lantern, it also glows in the dark. The lantern’s gills (pictured above) bioluminesce at the peak of their spore production. They are commonly mistaken for the popular chanterelle which looks very similar. Look for them with stands of oaks and eucalyptus. 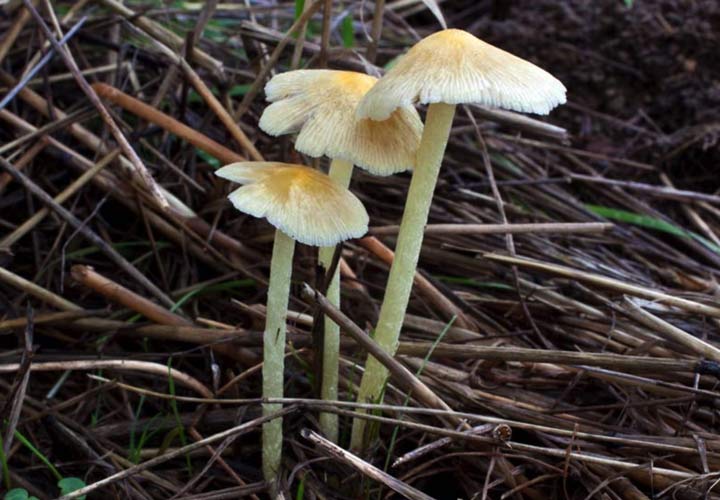 This small, attractive mushroom is among the easier species to identify. Relish your encounter as their lifespan is short, opening in the morning and shriveling by the end of the day. Look for them in grass or growing in and around dung. 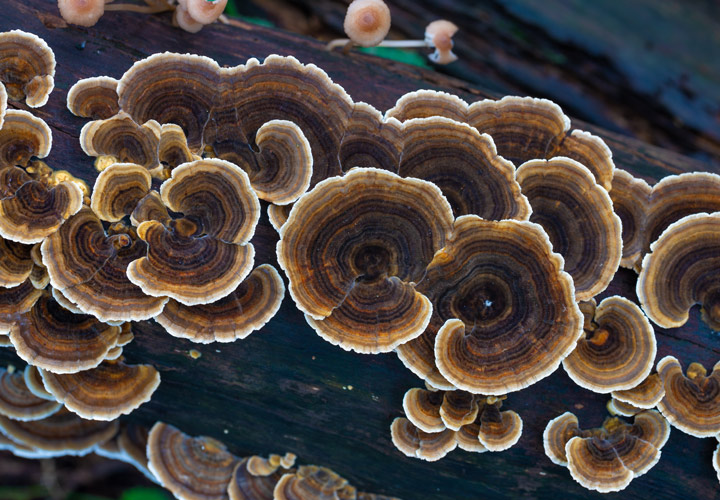 Though fruiting during the fall and winter months, shelves of the colorful turkey tail can be found almost any month of the year. They have been used for medicinal purposes for centuries, mostly for their immune-boosting benefits. Look for them in rows or overlapping shelves on stumps and logs. 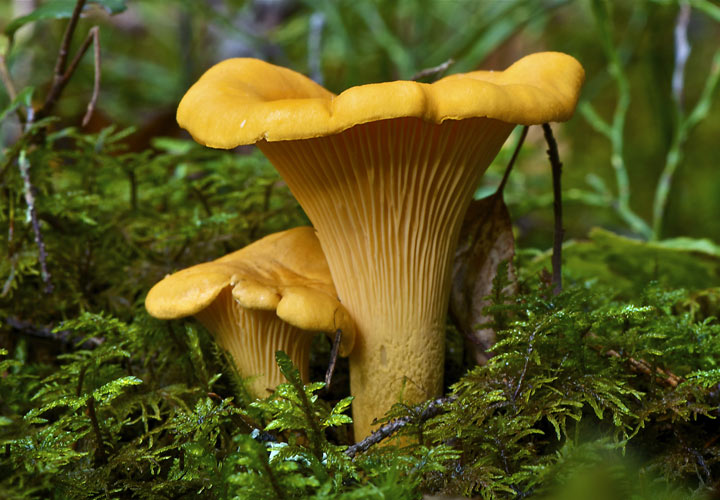 A favorite among wild food foragers and the culinary elite, this mushroom is one of the most sought-after of local mushrooms. Take a moment to enjoy their faint aroma of apricot. Look for them along the forest floor within stands of oak.

10 Common California Wildflowers and Where to Find Them

How to Spot Poison Oak Before it Spots You

Why Fall is the Best Time to Visit Pescadero

The Romantic Lives of Banana Slugs