Condors Are Returning to the Santa Cruz Mountains

The California condor is slowly returning to our beloved Santa Cruz Mountains, back from the very brink of extinction. In May of 2014, a three-year-old female known as Lupine flew more than 100 miles north from Pinnacles National Park in San Benito County and landed on private property near Pescadero. It was later photographed by a motion-activated wildlife camera, and this became the first documented sighting of the species within San Mateo County since 1904.

But there’s more exciting news: In August last year, researchers tracked via a GPS transmitter one condor’s flight from Pinnacles National Park, northward over the city of Morgan Hill and into the southern parts of the Santa Cruz Mountains. “As the population continues to grow, we expect to see their range expand,” said Alacia Welch, the condor program manager based out of Pinnacles. “It’s really just a matter of time before we see this flock along the Central Coast more permanently expand into other parts of the state,” she added.

It’s ok for you to freak out a little, too. Go ahead — it’s incredibly exciting.

At a roadside stop along Big Sur’s rugged Highway 1, three wild condors greet one another as passing tourists scramble for their cameras. Video captured by Walter T. Moore, POST president.

If you’ve ever had the chance to see a condor in flight, you’ll likely never forget the experience. Their massive, gliding forms are burned into my memory. And what gets me is that every single bird witnessed in the wild today is the result of an incredibly audacious conservation plan involving the capture of the entire population (27 wild birds in 1987) and a complex captive breeding and reintroduction program coordinated by the U.S. Fish and Wildlife Service. If their 9.5-foot wingspan ­— the widest of any North American bird — isn’t enough to trigger an involuntary jaw drop, the very fact they still exist should likely do the trick.

Although condors are still listed as an endangered species, there are now over 300 wild birds soaring freely in California, Arizona, Utah and the northern portion of the Baja Peninsula. And earlier this year, the U.S. Fish and Wildlife Service, National Park Service, and the Yurok Tribe announced the creation of a new California condor release facility for the reintroduction of condors to Yurok Ancestral Territory and Redwood National Park. It will be the first time a tribal nation has reintroduced the species and they will soon bring an end to more than a century without this imposing bird cruising their redwood skyline. 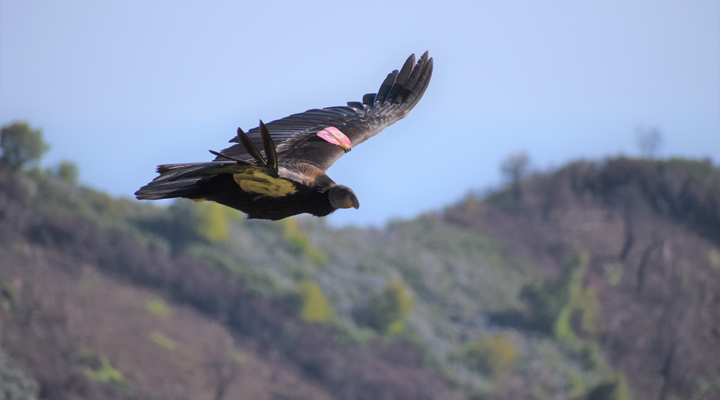 Condors mostly glide from place to place, preferring to ride large currents of air to get where they want to go as seen here along the Big Sur coast. Courtesy of the Ventana Wildlife Society.

Condors are highly revered by many Indigenous groups throughout North America. Oral histories and scattered archeologic remains indicate that they were used in sacrificial ceremonies as a way of transferring the power of the bird to those participating in the rituals. Many ceremonies throughout California involved dancers dressed in capes of condor skins or condor feather bands. Being a carrion eater (eating only dead animals) likely led to its incorporation into these ceremonies, a powerful link to the ancestral world. The return of this species is profoundly symbolic for Indigenous people — and I can see why — a winged symbol of resilience, ancestry and hope.

Closer to home, the reintroduction is much further along. “The population along the Central Coast is close to 90 individuals, though it’s nesting season, so that number may be slightly higher” said Joe Burnett, senior wildlife biologist and condor recovery program manager for the Ventana Wildlife Society. Since 1997, his organization has been releasing captive-bred condors each year along the Big Sur coast, a project that was complemented in 2003 when the sister program was added within Pinnacles National Park.

Both the researchers I chatted with explained that it’s a bit of a surprise that the Central Coast flock hasn’t had more activity within the Santa Cruz Mountains. “There’s lots of good habitat there, so it’s clearly just a matter of time before they find it,” Joe explained. And Alacia added, “if you think about how much food is available at Año Nuevo (State Park), with the breeding grounds of elephant seals, it seems they would certainly find that attractive. So far, it’s just an untapped or unknown resource for them.”

I feel like a kid waiting to eat his birthday cake. Can you imagine regular sightings of this winged behemoth from the summit of Mount Umunhum or the wind-scoured coastline of Año Nuevo? It’s no longer unrealistic to think that will be something we experience in our lifetimes. And, as I’ve learned, it may not be too far off.

Opportunity Amid the Ashes

In August of last year, the CZU Lightning Complex Fire tore through the heart of the redwood forest within the Santa Cruz Mountains. We watched with dreadful anxiety as it burned through the entirety of San Vicente Redwoods and Big Basin State Park; homes were destroyed and lives lost. It was one of the most difficult things our organization has ever experienced, and it will take years for our mountain communities to recover from this devastation. But one silver lining amid this tragedy is the opportunity it created for condors.

“Wildfires often don’t kill redwoods, but they frequently create large cavities within the trees that make excellent nesting sites for these birds,” Joe explained. “We’ve found that in Big Sur. All the condors we’re tracking are nesting in redwood cavities created by fire.” So, while it’s difficult for us to experience such tremendous loss, maybe the fire paved the way for the condor’s accelerated return to our home range…? I guess we’ll see. Regardless, I take this as a clear reminder that natural wildfires serve an important purpose and that they have a critical role to play here in California.

“The birds tend to fly farther in the summer months (June – September),” Alacia later explained. She shared that as the land heats up, large plumes of hot air rise creating the perfect conditions for these long-distance gliders. Condors mostly glide from place to place, preferring to ride large currents of air to get where they want to go. “And with the days being so long, the birds have a lot of time to move around,” she added. This peaked my excitement — if any of us were to miraculously witness a condor making its way into the frontier of the Santa Cruz Mountains, it will likely be sometime in the next few months.

Keep an eye on the sky.

What You Can Do

You can help condors by picking up “microtrash” when you are in condor habitat area.”Microtrash” refers to small bits of trash such as broken glass, bottle caps, can tabs and other smaller, broken down pieces of trash that can be ingested by condors and other animals.

And here are a few other simple steps you can take to help the California condor and its recovery:

The Romantic Lives of Banana Slugs

Amidst A Global Bird Emergency, This Bird-Lover Isn’t Losing Hope

How Do You Explain This Strange Bird Behavior?

Hiking 101: How to Get Started Hiking