Cowell-Purisima Trail: A Look Back in Time

Update: As of February 25, 2021, we’re excited to share that the Cowell-Purisima Trail is open seven days a week. This POST-protected trail is now managed and maintained by our partners at San Mateo County Parks. Learn more in the full announcement.

Every time I ride over Highway 92 into Half Moon Bay it feels like I’ve gone back in time. It’s one of the reasons I love living here. We have access to a stretch of California coast with no traffic lights for over 45 miles (Half Moon Bay to Santa Cruz) and that’s a pretty special thing when you’ve experienced the alternative elsewhere.

There are tons of great trails along this coast. But around our office, one staff favorite is the Cowell-Purisima Trail, just south of Half Moon Bay. It’s a gentle trail that meanders along the edge of the coastal bluffs for 3.6 miles with panoramic views of the Pacific, beaches and surrounding farms. It’s a total gem.

There’s a surprising amount of history within these few miles of trail. If you’re in a hurry to check it out, you can find hiking information here, but I suggest taking a minute to travel back in time with me – this trail’s history might surprise you.

Roughly halfway into this hike, the trail crosses Purisima Creek. On the north side of the creek near the trail, an Ohlone village site (a colloquial name used for the many native people in this area of California) existed for as many as 10,000 years. It’s a profound place to reflect on this landscape’s history and stewardship. Standing there, you’ll see why this was such a perfect place to settle, with fresh water flowing a short distance to the edge of the bountiful Pacific Ocean.

The Ghost Town of Purissima

If you were to follow Purisima Creek upstream from where it crosses the Cowell-Purisima Trail, in less than a mile you’d find the ghost town of Purissima (double “s”). You might be surprised to hear that at one point in time, this town was one of the most prosperous communities on the San Mateo Coast.

Founded in 1868 by Henry Dobbel, a German immigrant who had made a fortune in San Francisco during the Gold Rush through trade and a successful waffle restaurant (must have been delicious), Purissima was one of the first Euro-American settlements on the coast. Dobbel financed much of the town’s initial construction and, by the early 1870s, the town boasted a post office, hotel, several stores and a school with over seventy students enrolled.

The future looked promising for this burgeoning coastal town, and when the Ocean Shore Railroad arrived in the early 20th century, suburban expansion along the coast south from San Francisco became a real possibility. But years of crop failure and a decline in local logging drove most residents to the more established Spanishtown (now known as “Half Moon Bay”). And when the railroad went bankrupt in 1920, it wasn’t long until the town of Purissma was completely abandoned. Today, there are no standing structures, but the cemetery is still visible along Verde Road. It’s worth driving past on your way to or from the Cowell-Purisima trailheads. 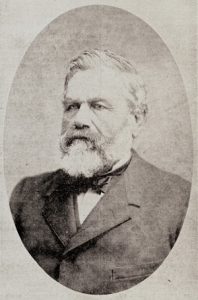 This name might be familiar. Henry Cowell (pictured at right) was a powerful business tycoon from the second half of the 19th century. He made a fortune in the lime kilns business, supplying San Francisco with much needed building materials. Today there are still a number of locales with his signature, including Henry Cowell Redwoods State Park, Cowell Beach and Cowell College, to name a few.

Aside from his business exploits, Henry Cowell was also a very wealthy land owner. In the late 19th century, he bought the ranch the Cowell-Purisima Trail now crosses with the intention of raising exotic breeds of cattle, horses and angora goats. After his death in 1903, the land was passed down through the generations and eventually put on the market in 1985 to raise funds for the Cowell Family Foundation.

When the Cowell Foundation decided to sell the ranch in 1985, the land was at risk of being lost forever to urban development. POST, not even a decade old at that time, had to act quickly to acquire and protect this land from that threat.

The Cowell Foundation offered POST one year to raise $2 million to acquire the property. Through the support of generous donors, POST was able to leverage private contributions to obtain a matching grant from the Cowell Foundation and, with the help of state bond funds, protect this piece of the San Mateo Coast. It was one of POST’s earliest milestones in protecting this part of our coastline.

After permanently protecting the ranch through a conservation easement, POST sold nearly 1,200 acres to local farming families for row crop agriculture and cattle grazing. The remaining land, all immediately adjacent to the coast, was donated to the State of California. It is through this work that the Cowell-Purisma Trail became a reality for you to explore.

Distances: 3.6 miles one-way from one trailhead to the other; 7.2 miles roundtrip (out-and-back)

Season: All year, but the fall is particularly nice.

Access: Open 8 a.m. to 5 p.m. to hikers, walkers, wheelchairs and bikers. Dogs and horses are prohibited to protect the sensitive wildlife species and farm produce from contamination. Be sure to check the San Mateo County Parks website for occasional trail closures.

Accessible Restroom: The southern trailhead has an accessible vault toilet (no sink).

The Cowell Purisima Trail, just south of Half Moon Bay, is part of the California Coastal Trail which will one day span the entire rugged edge of the Golden State. It is, by far, one of our staff’s most cherished trails, and for good reason. The views of the Pacific, pastoral setting and gentle grade make this one of the most enjoyable trail experiences on the California coast.

Most of the trail is wheelchair accessible, with the exception of some steep terrain in the middle of the trail where it crosses Purisima Creek (see map below). It’s a short section, but the grade there is steep and not suitable for wheelchairs. We recommend that trail users pick an end of the trail (north or south) and make an out-and-back trip to this point, unless assistance is available to safely make it up and down this grade. See the map, and please plan accordingly.

There is parking available at both the northern and southern ends of this trail. The southern trailhead has a wheelchair accessible bathroom and a space for a full-sized van. The trail and these parking areas are open from 8 a.m. to 5 p.m. and are managed by our partners at San Mateo County Parks. Be sure to check the San Mateo County Parks website for trail conditions and closures before going.

Hike Through the Baylands

Back to School…Kinda? Where to Take Your Kids to Get Outside

Backpacking Across the Peninsula (part 1)

The Bay to Sea Trail: A Journey in the Making