It’s not every day that a forest is intentionally set on fire.

But that’s exactly what happened the morning of February 27th on a 25-acre portion of POST-protected San Vicente Redwoods. I was invited to tag along to take photos and video as firefighters from CAL FIRE ignited and controlled this “prescribed fire” — one set for the purposes of ecological restoration and to remove excess fuel on the forest floor to protect the nearby communities in the event of a larger, uncontrolled fire. It was my first time witnessing something like this and, to be honest, I wasn’t quite sure what to expect.

When I arrived that dry, February morning, I was greeted by a dozen CAL FIRE firefighters who had begun to gather for their morning briefing. Scrambling to appear equally as prepared, I grabbed a camera and stumbled to find Andy Hubbs, the vegetation management program coordinator for our region and one of the main leaders for the day. He had graciously offered to be my chaperone.

With the briefing underway, I realized just how complex the planning is for prescribed fires like this one. The crew had been waiting over a year for a window of time when the wind, air quality, moisture content of the plants, and even the humidity in the air all lined up to provide optimal conditions.

Here CAL FIRE firefighters use gasoline-fueled drip torches to carefully ignite this prescribed fire. This low-intensity fire helped to remove excess fuel from the forest floor mitigating risk in the event of a larger, uncontrolled burn.

For prescribed fires, I learned that you don’t want the forest to be too wet or it never really catches fire. And you don’t want it too dry either, or it might burn a little too hot. You want something in the middle. You want what we had that morning — optimal conditions for a safe, prescribed fire. Today was the day. It was time to move.

Turns out, wild land firefighters might be equally as good at starting fires as they are at putting them out. Using gasoline-fueled drip torches, the crew had a hot blaze moving across the forest floor in minutes, the heat of which was enough to force you to turn sideways in fear that a good portion of your face might melt. I stood back and watched as the crew moved in simple unison — a careful choreography of fire, water, boots and smoke.

Fire, I was reminded that day, is more than a destroyer of things. At the right intensity and in the right circumstance (like this), it can also be productive and beneficial. I watched as the firefighters worked with their hoses to keep the fire moving across the forest floors and knock it back down when it began to climb into trees. By maintaining this low intensity fire on the forest’s floor, they achieved multiple benefits for the health of the landscape and the safety of the nearby communities like Bonny Doon, Felton and Ben Lomond. 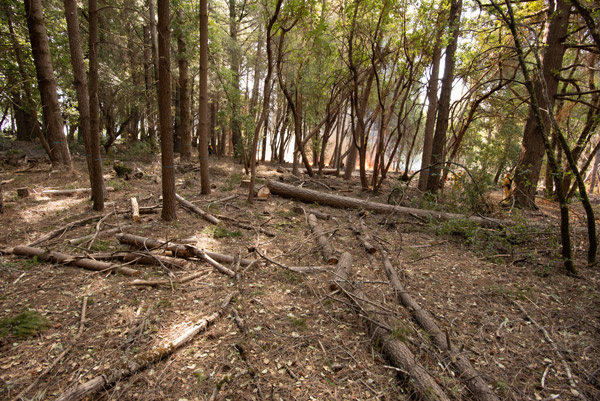 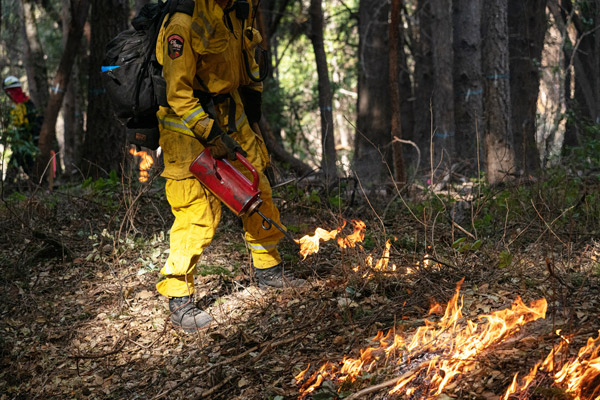 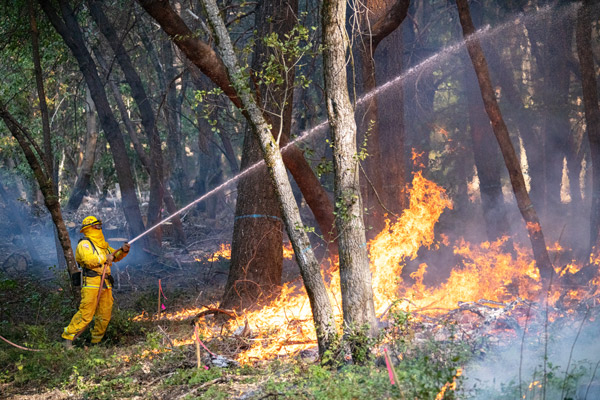 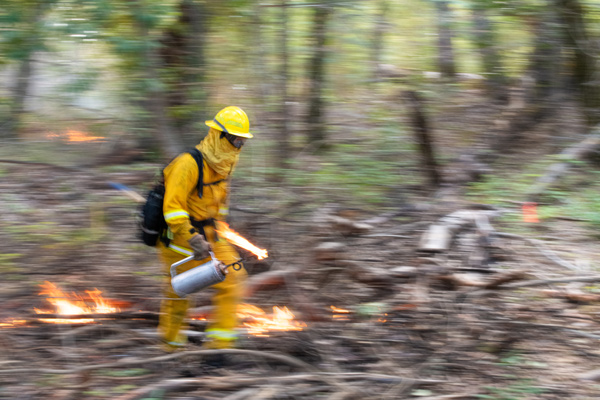 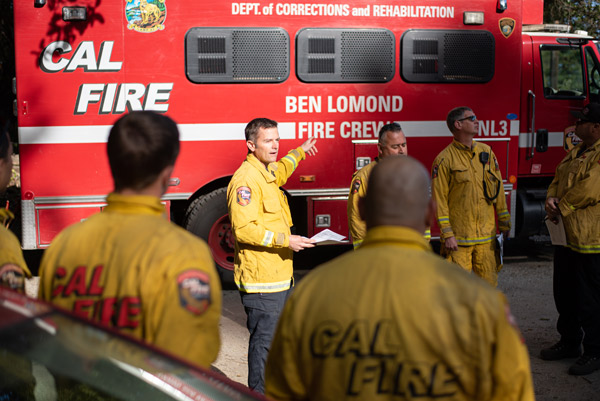 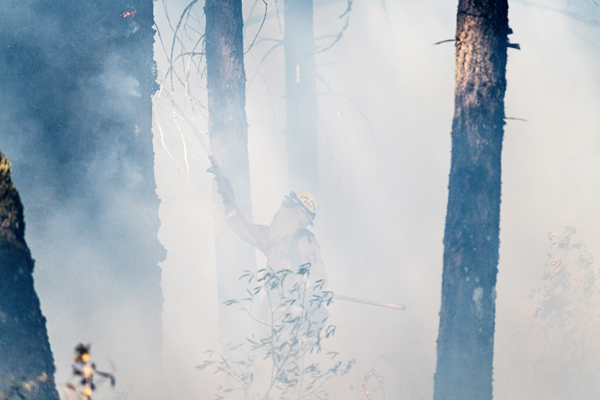 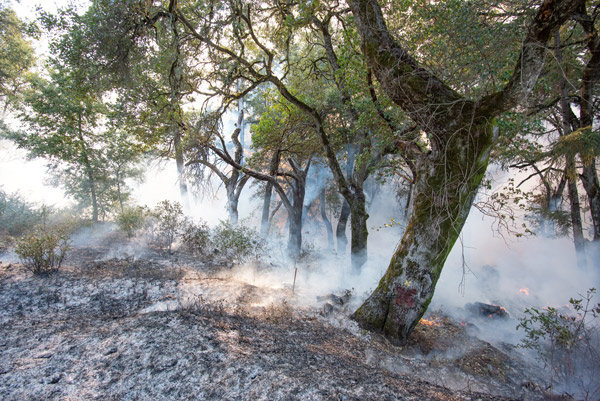 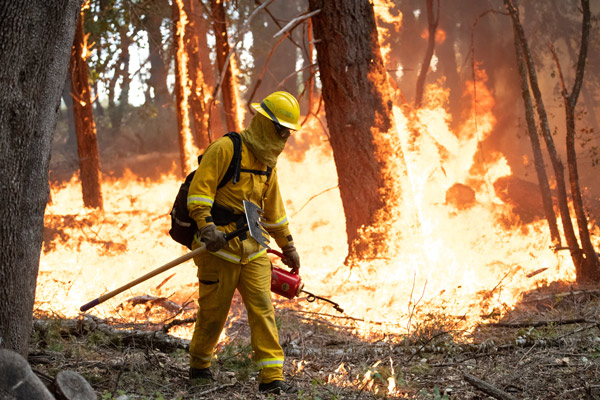 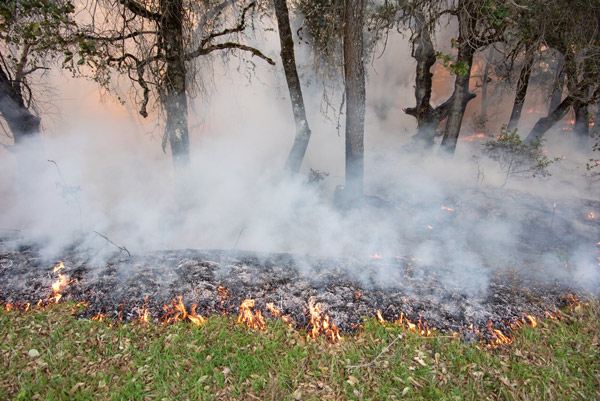 Standing in the forest of San Vicente Redwoods, it’s easy for even an untrained eye to notice that it’s a landscape still in recovery from a time of abuse. Around the turn of the 20th century, industrial loggers cut down nearly every tree on this property (back before they knew just how destructive such a practice was). And since that time, the forest at San Vicente Redwoods has struggled to return to its former health. The impacts are still reverberating to this day.

Much of the forest that has grown back on this property is overcrowded and out of balance. Without its big, old redwood trees with their thick, fire-resistant bark, this forest is more susceptible to large, catastrophic wildfire. Simply put, it’s not as resilient as it once was.

Why are prescribed burns (and low intensity fires) so important?

The fire that was ignited that day burned so well, under conditions so ideal, that it didn’t need to be extinguished and, instead, was allowed to do its thing overnight. As a CAL FIRE engine stood by, the fire smoldered into the night, liberating the seed bank and bringing new life to this ancient forest.

This experience was a clear reminder for me that fire is a natural part of the ecosystem in California. And now I better understand the role it can play, not only as a destroyer, but as a creator of new life — a tool to be used to keep our forests healthy and our communities safe.

How We’re Reducing the Risk of Catastrophic Wildfire

Bringing Fire Back to the Land

The Future of Fire in California