Shipwrecks of the San Mateo Coast 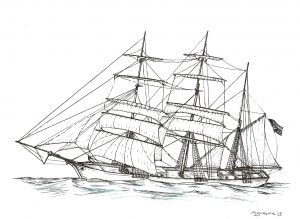 On the evening of January 17th, 1865, while the American Civil War was still reaching towards a conclusion, the crew of the clipper ship Sir John Franklin found themselves enveloped in a thick fog as they approached the Port of San Francisco. However, tragedy would intervene, just as it had for the ship’s namesake- a reference to the ill-fated arctic explorers of the Franklin Expedition, for this ship and crew were destined to wreck.

Join Peninsula Open Space Trust (POST) as we host California State Park Archaeologist Mark Hylkema for a lecture on the maritime history of the San Mateo Coast from the time of Spanish explorers, the California Gold Rush and beyond. In this lecture, Mark will describe his investigation into historical shipwrecks at Franklin Point, just south of Pigeon Point, an area that was notoriously treacherous in the early days of sailing in California. We will focus on the story of the Sir John Franklin shipwreck of 1865 and the modern-day discovery of its victim’s shallow graves.

All registrants will receive an access link prior to the event.

More about our Instructor, Mark Hylkema

Mark Hylkema holds an M.A. of Anthropology from San Jose State University. He worked as an Archaeologist with the California Department of Transportation for 12 years, prior to his current role as an Archaeologist and Tribal Liaison for the Santa Cruz District of California State Parks. Mark has led a variety of investigations throughout the Peninsula and South Bay, including many areas protected by Peninsula Open Space Trust and our Partners. A primary focus of his work has been to support contemporary local Indigenous groups throughout his career. 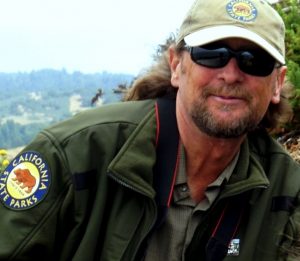 Franklin Point is part of Ano Nuevo State Park and sits just south of Pigeon Point Light Station this property is part of coastal lands POST has worked to protect for over 40 years. To find out more about visiting Ano Nuevo check out this blog. POST has assisted in protecting much of the land in this part of the San Mateo County Coast. Learn more about our Public Access Program or download your Coastal Hikes Guide here.

This event is part of POST’s community event series, which is open to the general public as well as POST donors. We hope you’ll join us! We also curate a separate series of private events for our donors. Learn how you can support POST here: openspacetrust.org/support-post

Peninsula Open Space Trust protects and cares for open space, farms and parkland in and around Silicon Valley. Since 1977, POST has protected over 76,000 acres in San Mateo, Santa Clara and Santa Cruz Counties.

California State Parks provides for the health, inspiration and education of the people of California by helping to preserve the state’s extraordinary biological diversity, protecting its most valued natural and cultural resources, and creating opportunities for high-quality outdoor recreation.